BLOCKCHAIN ABC "Who is who in the cryptocurrency universe" 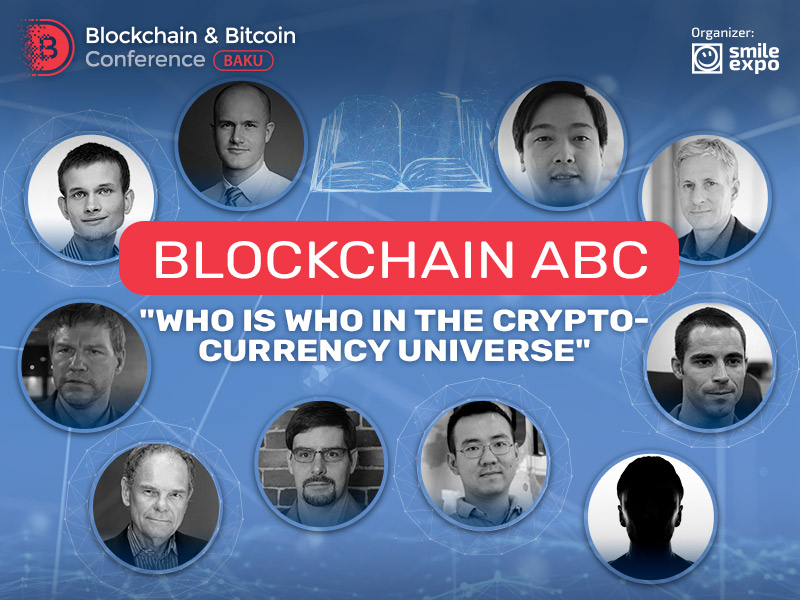 The article presents personalities who significantly influenced the cryptocurrency universe.

A creator of the Bitcoin protocol and the first version of the specialized software. Satoshi’s personality remains wrapped in mystery: we still don’t know how many people work under this pseudonym.

On October 31, 2008, Satoshi in detail described the decentralized technology and its future in the article ‘Bitcoin: A Peer-to-Peer Electronic Cash System’ as part of the specialized newsletter ‘The Cryptography Mailing list’. This publication heralded an important event: at the beginning of 2009, the developer issued the first cryptocurrency on the globe – Bitcoin.

In his profile on P2P Foundation, Satoshi mentions his Japanese origins. Some members of the crypto community claim that all the abovementioned information is fake: Satoshi mostly uses English, and specialized software for Bitcoin doesn’t have Japanese localization.

Satoshi’s personality was attributed to multiple people, including Elon Musk though he dispelled the rumors.

A Russian-Canadian programmer who considerably influenced the crypto space being 24 years old. Vitalik initiated Ethereum, a system of digital coins based on smart contracts.

In 2017, an Ether evangelist and Co-Founder appeared in top 10 in the rating ’40 Most Influential Young People Under 40’ published by Fortune magazine.

Founder of Litecoin, the first altcoin of Bitcoin. This digital coin grew popular on the market due to high transactions speed that exceeds manifold the one of Bitcoin. The date of the project issue is October 13, 2011.

Charlie worked at Microsoft, Guidewire, and one of Google’s departments. That experience granted the expert a booming career growth and professional development, which prompted him to create own cryptocurrency.

Charlie is also attributed to Satoshi Nakamoto though as others the developer rejects such rumors.

Co-Founder and CEO at Coinbase, one of the largest and most famous trading platforms in the crypto universe.

Coinbase is a neural hub and the most popular cryptocurrency trading platform in the U. S. established in 2012. It provides two entry points for business: a broker’s side allowing retail customers to buy Bitcoin, Bitcoin Cash, Ether, and Litecoin, and an exchange where large traders can place bets on cryptocurrencies and make related offers.

Roger set up Memory Dealers, a company selling computer hardware that appeared among the pioneers accepting Bitcoin as a payment. Roger Ver took part in Bitcoin hard fork. According to the investor, Bitcoin Cash is the only right version of it.

With his capital estimated at $7.5-8 bn as of 2018, Chris Larsen is ranked the wealthiest person in the crypto community. He co-founded the third most popular digital coin Ripple.

In 2012, he signed an agreement with Jed Mccaleb, Founder at a platform for currency transactions Stellar. Chris also issued Ripple XRP token that reached the record-breaking price of $3.75 with $141 bn market cap on January 1, 2018.

A programmer who created smart contracts with the aim of implementing sophisticated methods of contract law in e-commerce protocols. This system laid the basis for multiple digital coins, including Ethereum.

Moreover, Nick also created BitGold, a decentralized currency with an algorithm developed many years earlier than Bitcoin appeared. Crypto evangelists think it is BitGold that served as the foundation for Bitcoin.

Many users reckon that Nick Szabo is who we call Satoshi Nakamoto though the developer debunks these rumors.

Co-Founder and Executive Chairman of the educational and research platform Blockchain Research Institute. Don is a futurist who promotes the implementation of emerging technologies in day-to-day use.

The expert has issued 15 books about the way we use technologies in the society and business. This list includes Blockchain Revolution describing in layman’s terms the operating process of blockchain network and cryptocurrencies in whole.

Lead Software Developer at Bitcoin Core. Took part in the creation of the first Bitcoin appointed by Satoshi Nakamoto. Gavin has been working on the project since 2010.

Famous for the establishment of Bitcoin Foundation to protect cryptocurrencies within the legal framework. Gavin has an access to the alert key that allows sending broadcast messages about critical networks errors to all clients.

Head of Bitmain, the world’s largest manufacturer of mining equipment. He also created several brands, including Antmine, Antpool, and Hashnest. Jihan Wu became a recognized leader in the Bitcoin universe and a good orator. According to miningclub.info, Bitmain owners now have near 50% of capacities for BTH and BTC mining.

People propelling blockchain and cryptocurrencies in the country also play an important role. We are going to present personalities influencing the crypto market at state level.

Chair of Azerbaijan Internet Forum (AIF) Osman Gündüz promotes blockchain at state level. In spring 2018, he announced opening of the center for studying and developing the market of cryptocurrencies and technology of blockchain.

The politician is also concerned about the level of the nation’s consciousness, so the organization will carry out free courses dedicated to cryptocurrencies and blockchain for media.

CEO at the National Certification Services Center at Data Processing Center. He mainly works with billing, AzDataCom service, such services as e-signature, e-state, and e-ID, number portability and the blockchain-based registration system for mobile devices.

Adam Allahverdiyev and Zaur Bayramov are founders of the first national cryptocurrency of Azerbaijan – Azcoin. The project is still being tested, but the experts expect the new digital coin to be legalized and protected at state level.