Blockchain already changes the globe: application of the technology in finance 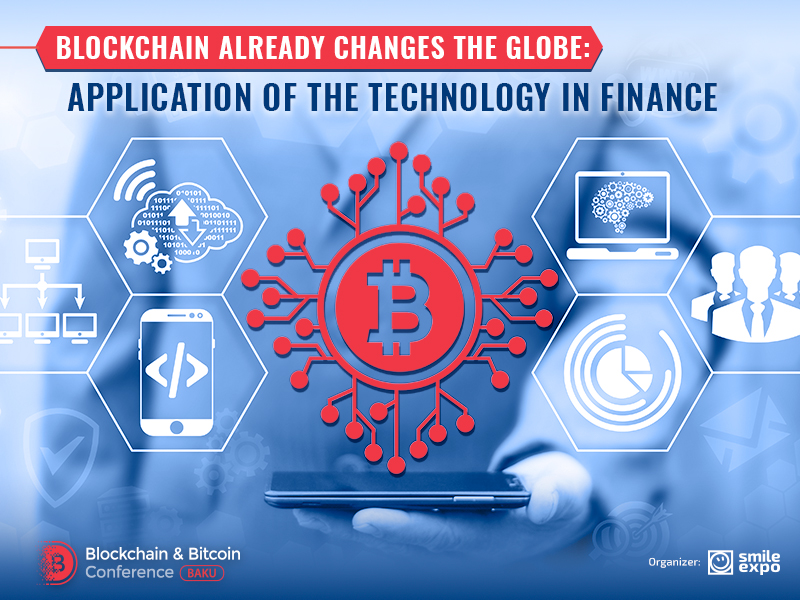 Blockchain is currently referred to as the Internet of value and the technology of the future. At the World Economic Forum 2016, it was reported that up to 10% of the global GDP would be calculated through blockchain in ten years. Nowadays, distributed registers penetrate various life spheres but finance is still the most prospective. So, how is blockchain applied for money transactions, what remains to be implemented?

Bitcoin exchange rate rose 25-fold within 2017 and several thousand times since its appearance as the pioneer cryptocurrency. This statistics explains why Bitcoin is the most fast-growing asset across the globe. 2018 didn’t appear to be as successful for Bitcoin as other digital money. However, exchange fluctuations grant competent traders a chance to gain their income.

Some people consider cryptocurrency to be a long-term investment. Currently, early Bitcoin investors own millions of dollars. Those who park money in tokens of the prospective startups also have a chance to generate great revenue. Others invest in the pioneer cryptocurrency being confident in its further growth.

According to the survey conducted by the Bank of Canada, the number of Bitcoin wallet owners grew twice within 2017, and about half use them for storage only. Other developed countries demonstrate a similar tendency. What is more, a stable growth of cryptocurrency exchanges is observed since 2012. It speaks volumes about the increasing popularity of cryptocurrency investments and trading across the globe.

To make money, financial market sharks not only buy and sell Bitcoin but also integrate it with various financial tools. For example, the American stock exchanges launched Bitcoin futures in 2017. There have been attempts to establish ETFs (exchange-traded funds) but the U. S. financial regulators didn’t ratify them.

Satoshi Nakamoto designed Bitcoin as a new global currency, and his idea has been fulfilled in some parts of the world. The U. S., Australia, India, Russia, South Korea, and dozens of European countries give an opportunity to pay for goods and services with Bitcoin: from coffee to an executive car. By the way, the Japanese government officially adopted Satoshi Nakamoto’s creation a payment means to be used in multiples places.

Payment with Bitcoin is mostly available via a smartphone app or a direct transaction from a mobile wallet. Several companies have already presented Bitcoin cards, analogs of debit cards with a balance equal to the wallet’s balance. Here are the examples: BitPay, Wirex, Shift, Xapo, CryptoPay and others. The majority of these cards is limited in terms of location. Besides, users report the high cost for the card issuance, service and withdrawal commission.

Where there is debit there is credit, as the authors of the blockchain-driven startups in the sphere of credit operations correctly suppose. Multiple companies successfully implement blockchain in this direction.

For example, SALT Lending allows to pawn your cryptocurrency asset and get a fiat loan. It’s a pretty beneficial type of credit, particularly when an exchange rate drop is observed. Meanwhile, ETHLend provides a single platform for creditors and borrowers who can enter into a loan agreement under various conditions using smart contracts.

ICO (Initial Coin Offering), or cryptocurrency crowdfunding appears to be one of the burning topics related to blockchain tech. It’s fundraising for project development with cryptocurrency as an accepted means of payment. Project tokens are given to investors in order to guarantee the security of their capital. In 2017, money collected in course of ICO surged over the total volume of venture investments. However, the industry also witnessed scam campaigns and knowingly failed projects.

ICO investments are currently a risk-taking thing. However, you generate great revenue in case of luck. That’s why startups continue collecting big money in Bitcoin and Ethereum. It should be noted that investors now demonstrate a more painstaking attitude towards projects and their analysis.

Smart contracts and cryptocurrency come in handy when buying rare and valuable things across the globe as well as organize auctions. For example, the blockchain-based state auction for distrained assets trading SETAM currently works in Ukraine. What is more, the Crypto Auction platform fueled by the distributed register offers everyone to put out and buy lots. The auction is conducted in project’s tokens.